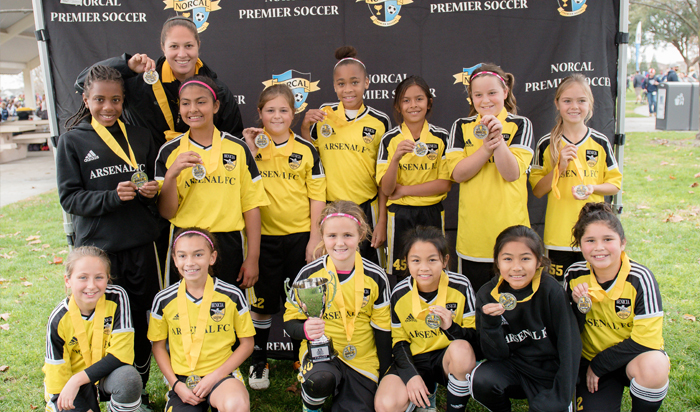 It was a magical weekend in Dublin for the Benicia Arsenal 03 Girls’ team.  Saturday, after two dominating shut-out games, the girls left in first place for the day but had to return Sunday to face the remaining two teams that were right behind them in points.  The game Sunday against Walnut Creek was intense with a lot of contact and crisp passes.  With just one minute left in the half, Benicia broke the 0-0 tie and led by 1 goal.  Starting the second half, in the first few minutes they were clearly dominating and increased their lead to 2-0; but Walnut Creek wasn’t going away.  Both teams battled all the way to the final seconds for an end result of a Benicia, 2-1 victory over Walnut Creek.  After a short break, Benicia came back to meet their toughest competition of the tournament, Pleasanton Rage.  Pleasanton was coming into the game on fresh legs (their first match of the day) and they gave our girls a great match-up.  Benicia ended up coming up short in the last game of their tournament with a 1-2 loss to Pleasanton Rage.  The team left the field that day proud of how hard they played and all that they had accomplished that weekend;  Eight goals for and three goals against for a total in tournament points of 28.

Later that night, things got very interesting as all the remaining games’ scores came in.  Turns out that three teams; Benicia Arsenal, Walnut Creek Soccer Club and Pleasanton Rage all finished the tournament with 28 points each.  So in the event of a tie, it goes to head-to-head play.  Benicia beat Walnut Creek, Walnut Creek beat Pleasanton, and Pleasanton beat Benicia.  Is your head spinning yet??  Since the championship could not be determined by head-to-head competition, it then goes to goals scored.  Each of the three teams scored a total of 8 goals in their four games played.  You got it; we are still dead-locked with a tie.  Next determining factor was goals scored against.  Benicia gave up 3 goals the entire weekend; Walnut Creek and Pleasanton Rage each gave up 4 so at 6:30 Sunday night your Benicia Arsenal 03 Girls Team were crowned the Dublin Fall Classic Gold-Level Champions.

This website uses cookies to improve your experience while you navigate through the website. Out of these, the cookies that are categorized as necessary are stored on your browser as they are essential for the working of basic functionalities of the website. We also use third-party cookies that help us analyze and understand how you use this website. These cookies will be stored in your browser only with your consent. You also have the option to opt-out of these cookies. But opting out of some of these cookies may affect your browsing experience.
Necessary Always Enabled
Necessary cookies are absolutely essential for the website to function properly. This category only includes cookies that ensures basic functionalities and security features of the website. These cookies do not store any personal information.
Non-necessary
Any cookies that may not be particularly necessary for the website to function and is used specifically to collect user personal data via analytics, ads, other embedded contents are termed as non-necessary cookies. It is mandatory to procure user consent prior to running these cookies on your website.
SAVE & ACCEPT